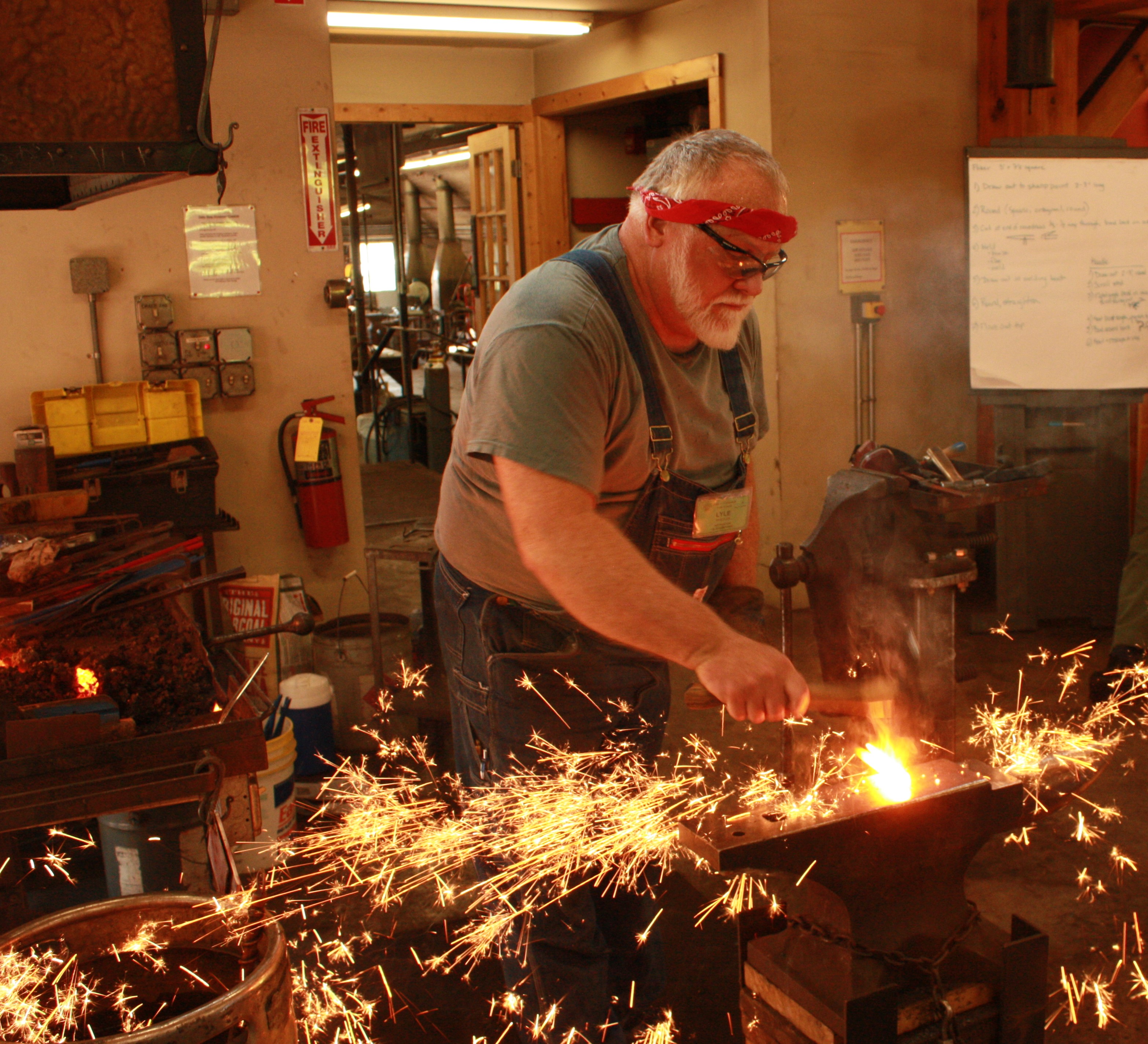 The Wilkes Teaching Forge Blacksmith Group meets every third Tuesday at NCABANA president Lyle Wheeler’s shop in Millers Creek, NC starting at 6pm. This group varies in demonstrating and open forge time but there are always several experienced smiths there to help out any beginners.
‍

The WTF local group has met consistently over the past several months at the Wilbar Forge, graciously hosted by master of the forge, Mr. Gary Roath, Sheet Metal Works, hosted by David Baker, proprietor and at Cooper Family Farm, hosted by Josh Cooper. We have had good attendance and welcomed some new members to our fold. The March meeting at Sheet Metal Works was a mixture of old and new. Josh Cooper demonstrated working with wrought iron as an unpredictable material. Josh emphasized the working temperature and nature of the fibrous material. David Baker, proprietor, demonstrated the use of his CNC plasma cutter to the amazement of all. Lyle Wheeler showed how to center a twist in a bar of iron by twisting halfway then reheating and changing ends in the vise and twisting the remainder. The April meeting was held at the Wilbar Forge. Sam Miller forged a fire-rake. David Baker forged a flowerpot holder. Gary Roath reported on the ironwork he observed on a recent trip to Ireland and meeting the Blacksmith of Dublin. Josh Cooper demonstrated a folded and welded axe head with tool steel bit. The Wilbar Forge is equipped with five anvils allowing for multiple forging opportunities for our meetings there. The May meeting was held at the Cooper Family Farm’s forge where Josh showed off a newly acquired antique Bradley No. 227, 200 pound power hammer. He stressed oiling and greasing the babbit bearings and then flattened a piece of pattern welded Damascus for a knife blank. He next showed the use of open-faced dies in creating a mouse element. Josh stressed the importance of rehearsing the steps necessary to achieve a successful heat using such a large hammer. A bulk coal buy was discussed. The June meeting was held at the Wilbar Forge. Sam Miller demonstrated a tissue holder. Lyle Wheeler demonstrated the use of a trivet segment bending jig. For show and tell, Josh Cooper brought a recently finished rectangular chandelier, 3’ x 5’ with six mica lights; an impressive piece. The July meeting was held at the Wilbar Forge. John Freas made two coathooks using a dedicated bending jig. Gary demonstrated how he preps the stock for one of his Ginko leaf trivets showing the orientation of the leaf to the foot. The August meeting was held at the Wilbar forge. Michael Thompson made an attachable handle for a frying pan with a split heart finial. Sam Miller worked on reverse twists. Josh Cooper showed several variations on bottle openers. The bulk coal buy was finalized. The September meeting was held at the Wilbar Forge. The bulk of the meeting centered around the making of barley twists with both round and square stock. Consensus was that using square stock negated the effect of the rolling twist. We took the month of October off and met again in November at the Wilbar Forge. We welcomed new members Cody Anderson, a newbie and Taylor Robert with some forging experience having completed Clay Spencer’s recent class at JCCFS. We all helped Cody make a hook and Taylor attempted a Ginko leaf, broke it off and made an “s” hook from the remains. Reports were made on the fall demonstrations and the NC State Fair. Lyle reported on the opening of Forging Ahead, a collaborative exhibition between SHHG and NCABANA. Respectfully submitted, Lyle Wheeler.
‍