The NCABANA Library is vast resource available to any member in good standing. The library includes instructional manuals, artist guides, past copies of the "Hot Iron Sparkle" dv_720_newsletter, and even DVDs. There are two easy ways to borrow resources. First, you can go to any quarterly meeting of NCABANA, browse the selection of titles available, and check out a book/DVD right there on the spot! However, at any time of the year, you can always download the form below and email or mail it to the librarian (contact information on the form). Let's get the knowledge flowing!
‍ 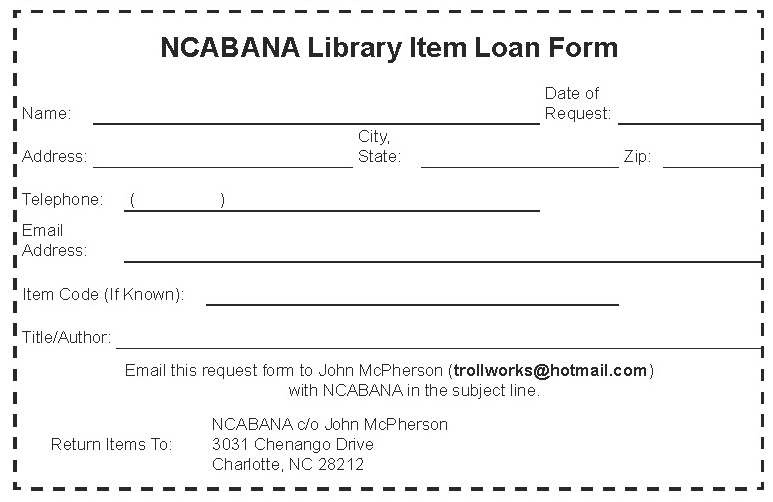 >BK-00012-A "Basic Blacksmithing,Intro to Tool Making" 1993,   Harries, David & Heer, Bernhard. Written as an Instructor's guide to teach self-sufficient tool making to Third World farmers, starting from scrapped car parts. Good line drawings, and builds on skills from simple to complex.
>BK-00016-A "New Edge of the Anvil" 1994, Andrews, Jack. Over 150 excellent drawings and discussions of tools, equipment and skills from a gifted Instructor.
>BK-00017-A "The Smithy's Craft and Tools" 1981, Schmirler, Otto. A primer of ornamental ironwork, and the tools and processes to create them. Over 200 photos and many drawings present the manual hammer and anvil skills to produce architectural works without power tools.
>BK-00028-A "Professional Smithing: Traditional Techniques for Decorative Ironwork, Whitesmithing, Hardware, Toolmaking & Locksmithing" 1980, Streeter, Donald. Geared towards turning out products to sell in shops and market stalls, he makes great use of jigs and fixtures for working alone and running a business. Many step by step projects in B&W photographs.
>BK-00009-A "The Blacksmith's Cookbook, Recipes in Iron" 1986, Rev 2010, Whitaker, Francis. Advanced tips, tricks and skills from a master craftsman, teacher and noted curmudgeon who started out with Samuel Yellin in 1922. Notes from 10 years of conducting classes and workshops nationwide.
>BK-00011-A "The Blacksmith's Craft:An Introduction to Smithing for apprentices and craftsmen"  1952SIRArst book in the Britishseries on bringing back the skilled building trades. Covers tools, equipment,fire management, processes, materials and projects.
>BK-00021-A "How to Forge Weld on a Blacksmith's Anvil" 1995, Heath, Robert M. Unraveling the mysteries of forge welding in a fire.
>BK-00019-A "Practical Blacksmithing & Metalwork" 1980, Rev 1988, Blandford, Percy W. Dry and lackluster text in a dated style, disjointed and un-inspired projects with simple line drawings.

>BK-00001-A "A Museum of Early American Tools" 1964,  Eric Sloane. Excellent drawings and descriptions of Colonial era tools and how they were used, by a famous artist.
>BK-00004-A "Blacksmith's and Farriers' Tools at the Shelbourne Museum" 1966, H.R. Bradley Smith. A collection of museum articles assembled in book form, this covers in depth every common and most uncommon tools found in a historic shop, and how it was used. Many black & white photos.
‍

>BK-00002-A "Catalogue of Drawings for Wrought Iron" 1973, CoSIRA. The 4th and largest volume, sketches of products to be copied and produced.
>BK-00013-A "Decorative Ironwork" 1962, CoSIRA. Book 3 in the series. All of the tools and techniques to forge a classic European driveway or garden gate.
>BK-00014-A "Wrought Ironwork"   1953, CoSIRA. Book 2 in the series.All of the tools and techniques to forge a classic English driveway or garden gate.
>BK-00022-A "Build a Hydraulic Forging Press" Batson, James L.
>BK-00018-A "Practical Projects for the Blacksmith" 1980, Tucker, Ted. If you are stumped for project ideas, then this is the book for you. Lots of photos and line drawings to accompany the step by step instructions.
>BK-00023-A "Wrought Iron Designs" 1873, Grave, H. Architectural grade drawings of European ironwork of the 19th Century, in all its splendor.
>BK-00024-A "Wrought Iron Artistry" 1983,  Schmirler, Otto. Almost wordless, this 168 page volume contains 765 photos, sketches and scale drawings of ironwork.
>BK-00003-A "Der Kunstschmied" 1976, Schmirler, Otto. Another amazing volume of images, this 224 page volume contains over 800 photos, sketches and scale drawings of ironwork.
>BK-00029-A "Wrought Iron in Architecture: An Illustrated Survey" 1929, Gerald K. Geerlings. The breadth and majesty of pre-WWII ironwork in European architecture.

>BK-00015-A "The Art of Blacksmithing" 1969, Rev 1976, Bealer, Alex W. The book that started ABANA, Bealer was a historian that went around interviewing old tradesmen and recording their stories and tools after WWII. Mostly factual, and rambling and chatty, but with relatively few illustrations and projects, so not a good guidebook for beginners.
>BK-00027-A "My Life as an Artist Blacksmith" 1995,  Whitaker, Francis
>BK-00030-A "The Artist-Blacksmith's Craft" 1935 &1941, Rev 1995, Julius Schramm
‍