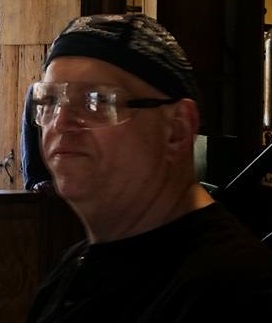 All NC ABANA Triangle Blacksmiths meetings, open forging sessions, and public demonstrations are cancelled until further notice.  Hopefully conditions will improve soon and we can safely resume our normal activities.

The Triangle Blacksmiths usually meet the second Saturday of odd numbered months at various shops around the Raleigh-Durham area. Open forging sessions are held on select Tuesday nights at the NC State Fairgrounds Forge. Additional events like public demonstrations are also part of our activities.

January 11, 2020
Triangle Area Blacksmiths Meeting
Saturday, January 11 the Triangle Blacksmiths held their January meeting at Heritage Forge on the NC State Fairgrounds in Raleigh, NC. There was no demo but several portable propane forges were set up and new members under the guidance of more experienced smiths got some hands on blacksmithing experience making railroad spike knives and hooks.  In attendance were several  who where attending their first meeting and 3 younger memebers who have been showing a real interest and aptitude for blacksmithing.  While the forging and teaching were going on outside, Eric Campbell, Brandon Wilson, Jim Kroeger, and several others working on making improvements to the retail area to improve the layout and counters. Additionally new shelving was built and installed in the basement storage area.  Yes there was a lot of carpentry going on for a blacksmith meeting. For the midday break we shared a potluck lunch, held a business meeting, and had an Iron in the Hat Raffle.
November 9, 2019
Triangle Area Blacksmiths November Meeting & Public Demonstration
Tobacco Farm Life Museum
709 North Church Street  Kenly, NC
Saturday, November 9 the Triangle Blacksmiths met at the Tobacco Farm Life Museum in Kenly, NC.  The meeting coincided with the museum's BBQ cookoff event and Dick Snow, myself, and several others also did a public demonstration of blacksmithing in the museum's blacksmith shop.  Behind the blacksmiths shop we set up forges, anvils, and tools for open forging. In addition to our members, a number of people who saw us at the NC State Fair, also attended and were given the chance to get some hands on experience under the guidance of experienced blacksmiths. The meeting was well attended and a number of families with children, got to do some forging. Inside the museum's blacksmith shop there was a steady stream of visitors watching us forging with the shops coal forge.  This is the third year we have held this dual event at the museum's annual fundraiser.
On Saturday, November 16, I returned to the Tobacco Farm Life Museum and demonstrated blacksmithing as part of the official opening and reception for their new exhibit - Forged in Fire: Rural Blacksmiths . Dispite poor weather the turnout was good and they enjoyed the demo.
‍